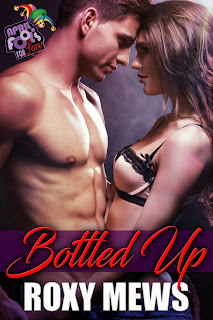 Buy it on AMAZON

A clogged drain. A pretend plumber. An April Fool’s Day to remember.

Good looks don’t last forever, and neither do modeling careers. When Nate’s time in the sun ends, he goes back to school. Trouble is, in order to pay for his last semester he’s going to need to get naked.

When a four month modeling contract took Nate Dallas on an adventure around the world, he was too young to realize he was an idiot to leave his Blue-eyed Betty behind. After one night of passion he let her love letters fade in his pocket instead of fighting for a trip home.

Betty Townsend never forgot about Nate. He’d sent her the world in envelopes filled with sea shells and sand. She saw stars when he kissed her under a sparkling spotlight on stage. And she felt her heart break when he never returned to her.

When Nate shows up at Betty’s door, big wrench in hand, she can’t believe her first love is the one her friend hired to fix the sink.

Once Nate recognizes Betty, stripping is out of the question. So is leaving. He can’t throw this chance away. The heat between them is undeniable, but when Betty finds out her first love is covered in glitter down to his g-string, do they stand a chance at rekindling the love that never really burned out? Or will fate make fools out of them again?

Enjoy the following excerpt from Bottled Up:

Her brain had fried the second she’d realized it was Nate. She’d completely forgotten about the glossy paper with his oily pecs on it hanging over the frozen foods section of her home. The ad was an oldie, but a goodie, and the black sand he was standing on filled one of her bottles. The vitamin supplement wasn’t the reason the VitaBoost ad was pinned up with a magnet. It was a memory.

A laugh came from the kitchen.

Her friend was sputtering as she ended the call, but it was Betty who was stumbling for words when she walked into the kitchen and found Nate holding the picture of himself.

He cocked his eyebrow at her, and a dimple popped on his left cheek. It was something she’d fantasized about endlessly. But not while he was holding up proof she’d been pining for him after all this time.

“I didn’t even think they printed this anymore.”

They didn’t. She’d found an old magazine at a half price book store and snatched it up when she’d seen his face smoldering out at her.

“This is really embarrassing. It was a motivation pic for me,” she lied. “I’m on a diet…and…could I have that back?” She reached for the magazine page and he pulled it behind his body at an angle that she had no hope of reaching.

Well, she could reach it if she scaled him like a climbing wall. Her eyes dropped to what would be a hell of a foothold before she got her bearings and put her hands on her hips.

“You know you’re attractive.” Betty cleared her throat. “Attractive enough to not bother with me when you made it big and took off around the world.”

“You can’t know how sorry I am that I left things the way I did.” He handed her the picture back. “I thought you might have been keeping it for another reason. It’s not every day I see a picture of myself stuck to my ex’s fridge.”

“Were we together long enough to call it a relationship? Don’t worry about it, Nate. We were kids. Kids grow up, right?” She didn’t have time to feel foolish when he pulled his lips between his teeth. She felt the burn she’d never lost for him start to smolder. She should be mad at herself, but all she could really feel was longing. Remembering the job that had taken him away before they’d had a chance to explore each other, she closed the gap between them. She had to ask: “What would have happened if you hadn’t left?”

Nate’s hand rested on her face. He tilted her chin up and suddenly Betty was back in school. She was performing on stage, and Nate was still her Romeo. Only he didn’t have to leave for another country now. He was really here.

“I didn’t want to leave. By the time they got me back in the states, you were already in college, and…”

She had tried to forget about Nate in college. She’d gone out on dates. But they’d never made her feel the butterflies she’d felt with Nate. No one had her laughing with joy as she read a letter. No one else sent her souvenirs of the world. Now Nate was here, and it should be awkward. Instead his hand touched her and she couldn’t remember why she’d given up. He tucked a stray hair behind her ear and licked his lips. Her stomach fell out of her hoo-hah and flopped around at her feet like a fish out of water.

God, he was gorgeous.

But even with his stunning hazel eyes and adorable dimple, she realized she was keeping him from doing his job.

Betty coughed and stepped back. She ducked out of whatever spell he’d spun around her and waved her arm in the general direction of the sink. “I suppose I should let you get back to work. I promise, there will be no more pictures of yourself to distract you.”

Well…there wouldn’t be after she went to the bathroom and took the other one down.


When the Lights Go Out 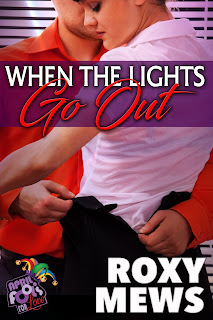 Buy it on AMAZON, KOBO

Named after the date of her conception, April Prime was used to hiding away and avoiding the world on April Fools’ Day. Or at the very least, avoiding her parents who tended to celebrate the holiday very differently from the rest of the world.

This year would be different. This year she closed on a home, and was taking control of her life. A few hiccups had her headed to an office supply store in search of moving supplies. Crashing through a bathroom door, she stumbled on a bit more than she expected when mister tall, dark, and indisposed was already using the facilities.

Taylor James was stuck being the brunt of yet another round of April Fools’ pranks. One of them being a change of the bathroom door signs. He went to work knowing he’d have to navigate a mine field. What he didn’t expect was a woman bursting in on him only to send his head spinning.

Despite the scenery, April is ready to make a red-faced retreat. That’s when a car crash knocks out the power to everything inside the store, including the electronic locks.

By the glow of the emergency flood light the two realize they may be stuck for a long while. April and Taylor could wait out the inconvenience in silence, or they could capture a moment together, and just maybe find something special when the lights go out.

Warning: Sex in the dark may lead to orgasms and head injury.

Enjoy the following excerpt from When the Lights Go Out:

“Want to know why I hate April Fools’ Day?” she asked.

“If you can top being glued to the toilet seat and getting assaulted by a bucket of bouncy balls before coffee, have at it.”

“My parents conceived me on April Fools’ Day.”

“Why do you know that?” He couldn’t imagine having knowledge of his conception from his own parents.

“They named me after it.” She sighed. “My first name’s April, all right? It’s their favorite funny story. They told it to everyone. Every date I took home. Every friend I invited over. And mind you, my very first birthday sleepover they told all the girls in my second grade class, that they had sex on this very night eight years and nine months ago.”

“Thinking of your parents having sex every time someone says your name? Okay, you win.” Taylor couldn’t stop laughing. “I do know your first name now. Wonder if I’ll get your last name out of you before we’re rescued.”

“Not a chance, mister. You’re not getting any more out of me. We’re having an intimate conversation between strangers.”

He heard some crinkling.

“What is that?” he asked the blackness. Her mother had slipped two things under that door. One was food, the other… He opened his eyes further to try and process.

“I got hungry,” she said around a bite of the granola bar. “Don’t worry. I’ll share.”

Taylor wasn’t sure what she was sharing, but he damn sure wasn’t thinking about food when her hand crept higher.

Without his sight, the touch had every nerve in his body going off like a strobe light in the darkness. The hand that touched him was small, but definitely not shy. She pressed at the midpoint of his thigh as she shifted her weight and adjusted, so her knees were no longer touching his.

She pressed the half empty wrapper against his abdomen. She walked her fingers up his chest. His heart pounded as her digits tickled his nipple while they slid past.

He would have said something, but he wasn’t sure the sounds he made would be at all appropriate, and they might’ve been past that point now anyway. Her fingers continued up his neck and then traced along the line of his jaw. Even though it made no difference in the amount of light, Taylor felt his eyes close. He kept silent and he felt his face go lax with pleasure. Whether he should or not, he enjoyed her touch. For once he wasn’t worried about if the woman was marriage material or if she would be able to put up with his schedule. He wasn’t thinking about any of that. In the dark, he didn’t even have to worry about how she was reacting, because he couldn’t see. It was all about how she made him feel, and he felt alive.

Then her fingers found his lips. His suddenly dry lips. Without thinking, his tongue darted out to wet them, but he ended up licking her finger instead.

To connect with Roxy Mews find her babbling on Twitter, friend her on Facebook, visit her blog and find out more on RoxyRocksMe.com.