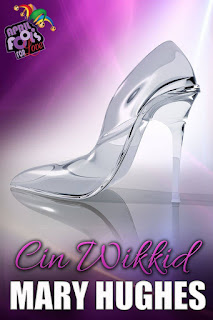 From award-winning bestselling author Mary Hughes comes a fairytale romance with a twist.

THE WRONGED DAUGHTER
Cinderella hungers to escape from under Widow Wikkid's grinding thumb. But to snare a plum job at Prince Industries, Cin desperately needs her degree, and she can't wrap her mind around tax accounting.

Then scarred but sexy Rafe Montoya ignites her imagination with his brilliant tutoring—and, as they work together in his cozy apartment, he sets her body on fire. She thinks he's the one for her, until he starts pushing her to attend Gideon Prince's marriage-mart ball.

THE HANDSOME PRINCE
Rafe is really Gideon Prince, head of Prince Industries. He must name his bride by his April first birthday or suffer the loss of his family fortune.

Rumors say he's still single because women love his money and looks, not him. Is he lonely or just another duplicitous tycoon?

THE GLASS SLIPPER TEST
Hopefuls flock to Prince's birthday ball, but only the woman who is kind, wise, and generous will win his heart. Is it Cin, or will her stepmother, as she always does, snatch the prize for her own daughters?

And on the night of the ball, when Cin discovers Rafe’s true identity, can she even accept his final test?

Warning: Rags-to-riches fairytale meets the texting generation. Stepsisters who are a blush-brush shy of a full makeup set, and a ball gown built like a tank. Contains material intended for mature audiences. Reader discretion advised.

Cin has been chatting online with tutor Rafe for about a month.
An odd delay made her frown before another text bubbled up from him.

—Cool.— She wondered what he had for her. Another picture of Snoopy? An image of a sleek coupe?
Or a video?

Her heart beat harder in memory. Last week he’d shared a clip, proudly showing her he could do twenty-five push ups in one minute. She had to take his word for it; she hadn’t been counting, hadn’t even been able to count, after the video started.

The shot zoomed in on Rafe’s back from above. His muscles bunched and released under his thin tank shirt as he strained to pump out reps.

She’d replayed that clip several times in private, thinking all sorts of hot, sweaty thoughts. The ripple of strength as he bobbed up and down…her breath steamed in puffs on the air and her thighs heated just from the memory.

But after another odd lag, the image that popped up in her feed wasn’t Rafe’s back.
It was his face.

“Oh!” She nearly clapped in delight. She’d been hoping for a better picture of him. His chat head was mostly grin, his eyes scrunched to moonlike slivers, his head turned and tilted at such an angle that she’d had to imagine what he might really look like.

Now she could see.

Tousled black hair, jet brows sharp as ink slashes. Eyes a brilliant blue, so gorgeous they cut into her soul. She drank in his masculine beauty, including the tops of compelling cheekbones.

The rest of his features, though, were round, boy-next-door average.

And one other thing. His right cheek was a mass of puckers, as if his skin was a darned sock or made out of bubblewrap.

No text with it. No snarky I really am ruggedly handsome or I’m Ironman.

Just the single picture, hanging there at the bottom of the message stream, almost as if it was holding its breath.

“Is that you?” She began to type the words, but hesitated pressing send.

While she wavered, a bubble popped up. —It’s me. I’m scarred. Pretty badly.—

She’d gotten used to his almost-mind-reading and erased her text then quickly typed, —Can you tell me what happened? Does it hurt?— She pressed send.

Regretted it immediately. What if she’d said the wrong thing?

The screen froze, and for a moment, her breath froze with it. Was this something that pained him to talk about? If she’d hurt him by asking, she’d feel terrible.

A reply finally popped up. —Doesn’t hurt any more. Stupid accident involving too much testosterone. But thanks for asking.—

Her breath unfroze, her body warming. Maybe he didn’t often talk about it, but he had with her. —Thank you for sharing this with me.—

He responded with a sticker, a purring cat with a heart over it.

He’d posted a heart. Longing, sweet and thrilling, threaded her body like candy syrup. She shuddered with it.
Dial it down, Cin. You’re overreacting. It was simply a cute little sticker. Didn’t mean he loved her.
Still, it was nice, and she liked it. She was about to search for a sticker to reply with when a line of alert appeared below.

The message bubble, when it popped up, contained a single line. 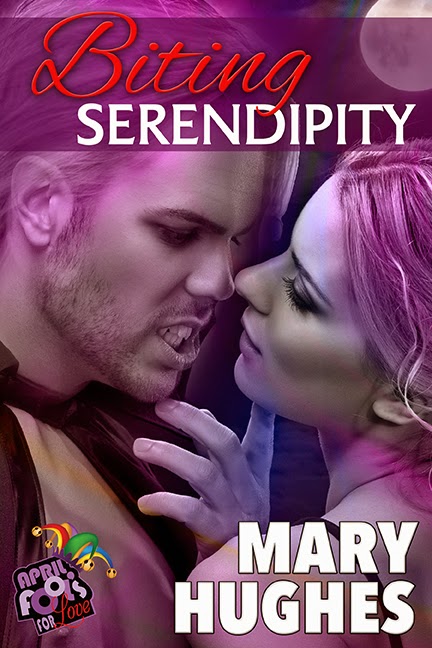 Serendipity “Sera” Braun wears glasses and a bun to teach during the day, but at night, she adds a breast-plumping vest and dirndl for her job hoisting beer steins at Nieman’s. The big, leather-vest-and-earringed Viking bouncer? He’s bedsheets waiting to get sweaty, but all he does is scowl at her. She’s trying to keep her geriatric stripper of a granny from breaking a hip, but it’s hard when she keeps getting distracted by that sexy, smoky baritone.

Thorvald Thorsson is bitingly lonely—every vampire around him is mating. But his ex-fiancée rejected him as a killjoy, so it’s high time Fun Thor comes out to play. No way he’d pair up with the cute but too-serious little schoolmarm who waits tables at the bar.

Sera bridles the wicked, delicious things she’d like to do with the muscular Viking, suppressing herself until she’s a volcano about to blow. Then they are thrown together in a prank war, and all his potent masculinity is focused on her. He makes her burn to let loose, but how can she and still be responsible for Granny and set a good example?

Warning: A terribly lonely vampire, a conflicted schoolmarm with a caged wild side, nosy roommates and the female version of a bromance, not to mention scorching sex, a whole town full of busybodies—and the best April Fools joke ever.

Wanted to lick so bad, to keep myself from doing it, I had to run my tongue over my suddenly throbbing lips instead.

His gaze dropped to my mouth and darkened, stormy this time like a steamy tropical squall. “What are you doing?”

He leaned closer, his hair swaying forward to frame his chiseled, handsome face. “Nothing?” His pupils dilated to pools of black.

My heart shot into overdrive. Air seemed to have left the small room; contrarily, what there was of it smelled, not of lime and coconut, but leather and male.

Searching my gaze, he reached out and gently cupped my chin. His fingers, warm and slightly rough on my skin, thrilled me down to my toes. His face was so near mine now I could feel the heat of his breath on my skin.

He’s going to kiss me.

My lips parted on quickened breaths. My desire must have shone in my eyes because the saucers of his pupils lit with a red flame. Blood pounded in my ears.

The vampire was staring at me.

Insanely, that turned me on. I tightened toes in my ballerina flats and lifted toward him.
The moment crystallized between us. His red gaze was tethered to mine, the hand that so gently held my face was crowned by a hint of talon, and when his lips parted, fang tips were revealed.
Vampire, human. I was prey. Yet I was also something precious. My lids slid shut in anticipation.

His mouth captured mine.

He tasted of whiskey, hot and oh-so-smooth. The sweet fire of his kiss sent my blood from hot to boiling, my mouth like the inside of an oven. I opened under his beguiling lips, to vent some of the heat.

Instead, more heat rushed in, his breath, scorching.

I trembled, my belly fluttering with excitement. My muscles yielded, and I fell into him. My breasts pressed against the wall of his chest like smashing against a cliff. Sharp, sweet desire stabbed my groin, and my blood whooshed ever harder in my ears.

“Sera,” he groaned. He backed off to swirl lips against mine, thousands of brief, buffing kisses that kindled my skin until my lips were burning.

My breath came in quick gasps, his scent like the crashing, salty sea. His fang tips grazed my lips as he kissed, sweet and heady sensations taking on an edge. I dipped my tongue between his parted lips, hinting for more, then thought, “Ah, fuck it,” threw out Staid Sera, wrapped arms around his neck, arched my body into his, and thrust my tongue into his mouth, telling him in no uncertain terms.

A growl ripped from his throat. The fiery thrust of his tongue battled past mine into my mouth, claimed me. I groaned at the taste of him, the feel of him, filling me. My jaw dropped, yielding to his onslaught.

He seized my bun in one big hand and held me captive for his plundering. He kissed me savagely now, a Viking invader.

One powerful arm wrapped my ribs, crushing me to him. His scent, tangy leather, wrapped me even tighter. My nipples tingled and hardened. I released his neck to slide palms over his shoulders, the ones I’d wanted to lick so badly, reveling in crowns of notched, rock-hard deltoids as big as bowling balls. My pelvis flooded with heavy, hot need.

He was all hard muscle, but something even harder, growing long and fat against my skirts, snagged my complete attention.

Who am I? A lover of stories that crackle with action and love. A mother, a flutist, a binge-TV-watcher of NCIS, Sherlock, and Agents of SHIELD. Most of all, a believer in grand passion.