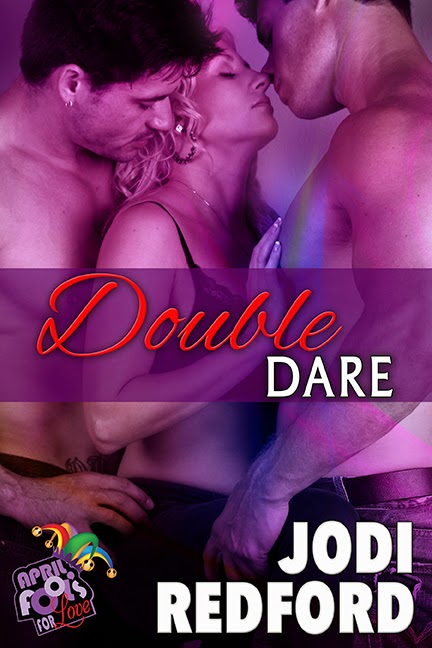 Part of the April Fools For Love collection

From the moment Graham Barlow and Matt Spencer moved into the bungalow across from hers, Dani Tipton’s willpower has been strung to its limit. Ignoring the hot and heavy fantasies the two hunks inspire on a daily basis is more than any woman’s libido can take. Although temptation beckons, Dani’s determined to be a good role model for her wild, trouble-prone younger sister.

Jumping in the sack with either of her sexier-than-sin neighbors sure as hell wouldn’t help her case. But when her sister sets up the ultimate April Fools’ prank, Dani suddenly winds up neck-deep in a compromising position. Literally.

For the last eighteen months, Graham and Matt have been carrying a major case of blue balls for Dani. No matter how hard they flirt or lay on the charm, she’s kept them strictly in the friend’s zone. So when they discover her buck naked in their swimming pool they figure they’re either hallucinating—or have been handed their one shot at rocking Dani’s panties off. Not too difficult to do, seeing how she’s not wearing any. Convincing her to indulge in a little frisky threesome skinny dipping? Easy enough. And the sexy interlude that follows is hot enough to boil the pool water. But when it comes to making their unconventional triad permanent, Matt and Graham issue Dani the biggest dare of all—entrusting them with her heart.

Warning: This M/F/M ménage brings new meaning to getting to know your neighbor. Lusty pool shenanigans and creative uses for hot tub jets. No bathing suit required, but bring an extra towel. Things are bound to get wet.

A motion across the street distracted Dani and she shifted her focus. Graham Barlow lifted from his crouch in front of a large stand-on lawnmower and swiped his grease-streaked forearm across his brow. The movement pulled his black tank top snug to his chest, molding the fabric to the mouthwatering contours of his ripped muscles. He tossed a look toward the shiny silver pickup truck that he and his roommate used for their landscape business. “Did you find that wrench yet?”

One of the truck’s doors slammed, and Matt Spencer popped into view. He strode to the disabled mower and passed the tool to his partner. A grunt fell from Graham. “What were you doing over there, jacking off? Took ya long enough.”

Oh Lord. Like she needed that image implanted in her brain. Especially since her hormones were already performing their own version of an exuberant Riverdance thanks to the yummy ogle fest Matt and Graham provided.

Damn it, she really hated that Erin was right. The two men were walking advertisements for lady boners. Unlike Graham, Matt had forgone a shirt, which put every inch of his strong, sculpted back on mouthwatering display. Her fingertips tingled as she imagined running them down the deep groove of his spine, cruising toward those cute dimples that rode just above—

A car horn tooted, and Dani jumped guiltily. Both men swiveled their heads and sent a wave to Erin as she reversed out of the driveway.

Erin poked her head out the car window, the sticky breeze rustling her neon blue pixy cut. “When are you gonna grow some balls and ask my sister out?”

Dani groaned, desperately wishing she could mimic a chameleon by blending with the nearby flowering lantana bush. Before she could safely duck inside the house without anyone being the wiser of her presence, her neighbors slashed their attention her way. She was fairly certain her cheeks were red enough Graham and Matt would be able to detect their nuclear glow from a mile away.

Her pulse revved at the wickedness of his expression and the resulting heat wave that swamped her body. There was no mistaking the blazing interest he and Graham had leveled on her. Since they’d moved in roughly a year and a half ago, they’d attempted to lure her to the Dark Side with a steady dance of flirtation, so she had a bad feeling those twin sparkles of determination in their eyes bode an outright war against her resistance.

Gulping, she tore her focus from Graham and Matt and slunk back inside the house. Snicking the door closed, she thunked her forehead against the whitewashed wood grain. Why must fate be such a devious bitch? Florida was full of retirees. Why couldn’t her neighbors be a pair of old coots who owned a closetful of lime green Bermuda shorts and compression socks?

Grumping under her breath, she detoured to the kitchen and grabbed a bottle of iced tea from the fridge. She twisted off the cap the same instant the doorbell chimed. Heart knocking, she stared in the direction of the front entry. Safe to say that wasn’t the milkman.

“Thanks a lot, Erin.” Grumbling, Dani shuffled to the door. A quick peek through the peep hole confirmed her suspicions of who stood on the other side. Sending a memo to her hormones to get a grip, she sucked in a deep breath and swung open the door. She returned Matt and Graham’s megawatt grins with her own wobblier version. “Hey.”

His gaze sparkling, Graham propped one hand high up on the doorframe, the position hiking the hem of his tank top. “Hey yourself.”

An endless moment passed while she stared transfixed at the intriguing peppering of dark hair that formed a happy trail down Graham’s washboard abs and disappeared beneath the low-slung waistband of his navy blue cargo shorts. His pointed cough snapped her from her trance. The muggy heat contributing to the warmth already occupying her cheeks, she lifted her focus and met his amused regard.

The tiny upward hitch at the corner of his mouth did funny things to her tummy. “We couldn’t help but notice that your bush is in need of a little TLC.”

She double blinked. “Uh, what?”

He cocked his head toward the flowering lantana to the right of him. The wicked glint in his whiskey-hued irises verified that he was plenty aware of his double entendre. “Wouldn’t take us but a minute or so to shape it up.”

“That’s incredibly nice of you guys, but—”

“Consider it a trade,” Matt offered.

She frowned. “For what?”

“The empanadas that your sister promised you’d bring when you come over for dinner tonight.”

She stifled a groan. “Please tell me Erin didn’t invite us over.” It’d be right up her sister’s alley to do something both embarrassing and rude, all while not giving a hoot.

Graham shook his head and chuckled. “Just you.”

“Look, I don’t want you guys getting the wrong idea about what she said earlier.”

“You mean asking you out?” Matt’s teeth flashed brilliant white against the sun-bronzed backdrop of his complexion. This up close, she easily detected every glistening bead of sweat dampening his sculpted pecs.

Do not allow yourself to be distracted by gorgeous man titty. She nodded vigorously, both at her inner reprimand and Matt’s question. Best to nip this in the bed—bud! Get your mind out of the gutter.—before she gave in to the urge to offer herself up as a human towel. “Erin likes to instigate things.”

“Yeah, but I happen to think she’s got the right idea. So does Graham.” Without warning, Matt’s fingers closed around hers. She jolted at the unexpected skin-on-skin contact, but it was the lazy stroke of his thumb along hers that spurred her wispy intake of breath.

His smoky blue gaze locked with hers, he pried her bottle of tea from her frozen grip. He lifted the beverage to his mouth and took a swig. She was too entranced by the sweep of his tongue catching a droplet of the tea on his bottom lip to be miffed at him brazenly availing himself of her drink without asking permission.


He passed the bottle back to her. “Dinner’s at eight. Don’t forget the empanadas.”

At the ripe age of seven, I penned my first epic, complete with stick figure illustrations. Sadly, my drawing skills haven't improved much, but my love of creating fantasy worlds is still going strong.
Yep, I still love writing about fairies, ghosts, and other supernatural creatures, only my stories pack a little more heat these days.

When I'm not writing or working the day job, I'm usually tinkering in the garden (weather permitting) or drooling over those smokin' hot Winchester Brothers from Supernatural. Strictly for research purposes, of course.
Find out more at jodiredford.com